Today we are releasing a major update to Outcast, our podcasting app made specifically for Apple Watch.

Outcast is a fully-standalone Apple Watch app, meaning you can browse and search for podcasts, download episodes, and play them back, all without your iPhone.

There are two cornerstone features of this update:

Note: We're aware there are some major podcast-related features being added to watchOS 5. We'll have more to say on them and how they relate to Outcast in a future update.

Both the streaming and playlist solutions we've come up with are somewhat novel, so I want to cover them in a little more detail.

One of the new features we've added is the ability to stream podcast episodes. You can see in the screenshots below: 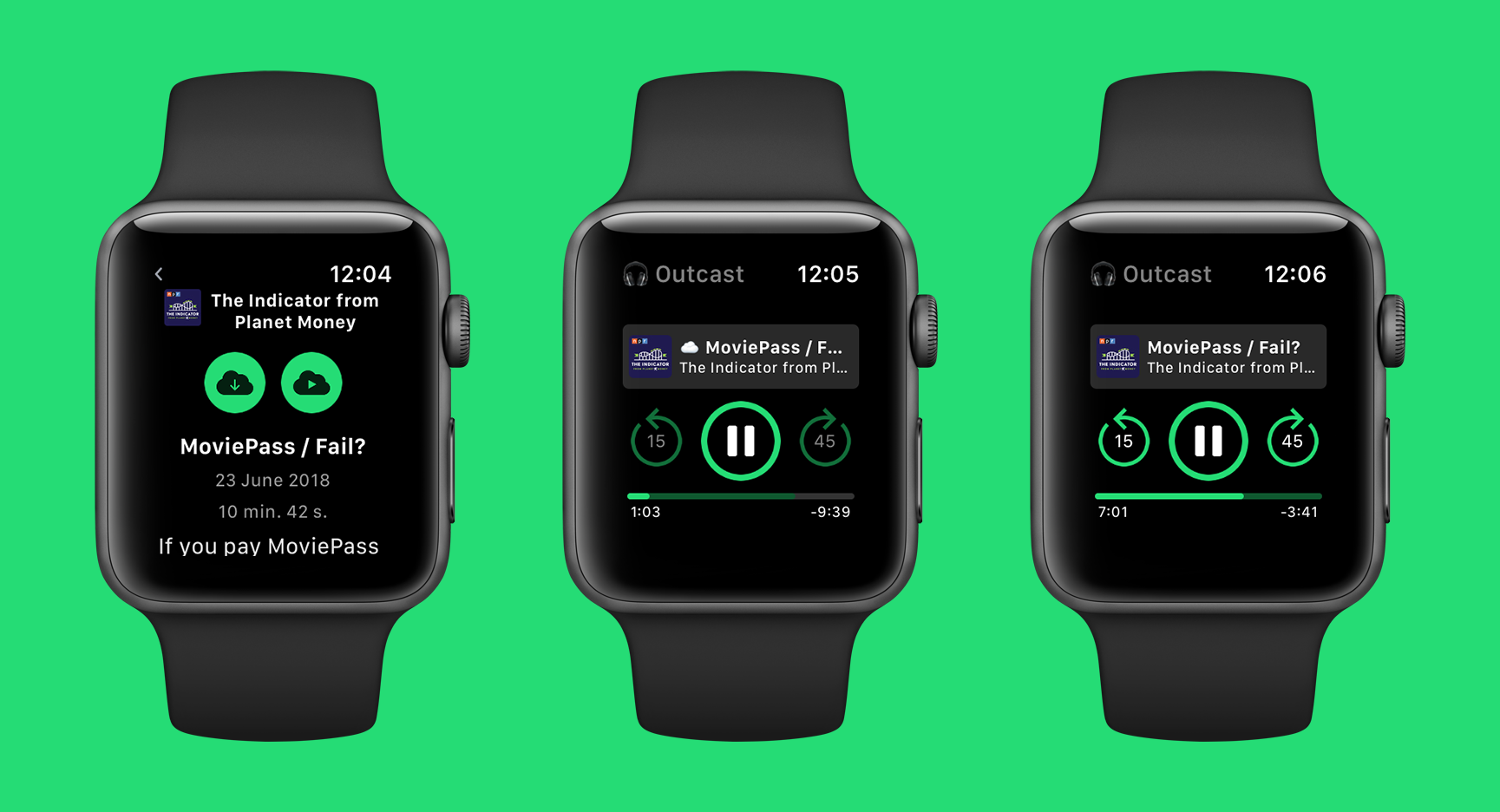 Currently, the only way to play background audio on the Apple Watch is to use the WKAudioFilePlayer class (and its child WKAudioFileQueuePlayer class, which we use for playlists).

In order to create a playable item, the WKAudioFileAsset class must be used. Unfortunately, it doesn't support remote URLs (link):

Since streaming is essentially just starting playback once more bytes are received, we figured we could achieve this with the tools available to us:

We were hoping that if you recorded, say, 100 KB to fileA.mp3, then if you recorded another 100 KB to that same file before playback concluded, it would continue to play until the end of 200 KB.

Unfortunately, WKAudioFilePlayer only plays the data that was available when the player was initialized.

Because of this, a new player item had to be created whenever bytes were available.

In reality, we continue to write newly-received data to the same file, and then pass the same file back to the player when the previous playback concludes. This works remarkably well!

One of the difficult parts of getting this to work was accurately tracking playback progress. When the player switches from the first buffer ("A"), to the second buffer ("A + B"), the player needs to start playing back from the end of "A".

When using WKAudioFileAsset, you can access the duration: TimeInterval property. Unfortunately, this may be the duration of the entire file, or just of the particular chunk. Because of this, we can't rely on currentTime for tracking progress in this particular use-case.

Instead, we make use of the "did play to end of file" notification (WKAudioFilePlayerItemDidPlayToEndTime), and use the current progress at that time (end of "A") as the starting offset for the new player item ("A + B").

Unfortunately, there are some tradeoffs we've had to make with the streaming solution in Outcast.

There are some things we plan on improving in subsequent updates though:

The othe major new feature in Outcast is the ability to create a playlist.

Playing back multiple files is relatively straightforward using the built-in WKAudioFileQueuePlayer, but managing the actual order of playback isn't so straightforward on Apple Watch!

Initially, we planned to automate the playlist based on the files you've downloaded and your sorting preferences, but ultimately decided to give the user full control over their playlist.

You can see in the following screenshot how playlists are managed:

The interesting part of this feature is the ability to sort items. Unlike UITableView and UICollectionView on iOS, there's no built-in way to sort items in WatchKit's WKInterfaceTable.

We wanted to implement a solution that fits the Apple Watch, so rather than dealing with drag-and-drop, we put the Digital Crown to use.

What we discovered is that WKInterfaceTable will automatically animate the following situations:

Thanks for reading! We'd love to hear your feedback about the new version, you can email support@outcast.app, or tweet @OutcastForApple.

Outcast 2 is available now from outcast.app.

We're currently working on integrating iCloud support into Streaks, which means all of your tasks and task data will…

From yesterday (22 Feb 2018), it appears iTunes Connect made a change when uploading your builds from Xcode, now…